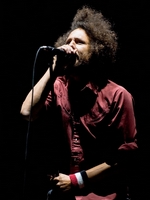 According to a correspondent for Consequence, the singer was hurt four songs into the band’s main set at Chicago United Center.

He was reportedly helped off the stage by crew members before resuming the show, where he performed seated on a monitor, apparently unable to put any weight on his leg.

JUST IN: Zack de la Rocha apparently injured his leg during Rage Against The Machine’s concert in Chicago on Monday night.

He performed the rest of the show while seated on a monitor. https://t.co/v4wwmRxmaG pic.twitter.com/N0x1qlNGGL