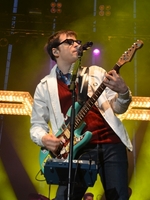 The band commemorated the anniversary with a message on social media, written by their longtime assistant Karl Koch, who wrote, “And just like that, it’s been 30 years to the day that weezer was born,” Koch said. “On 2/15/92, Rivers Cuomo, Patrick Wilson, Matt Sharp and Jason Cropper met at TK Productions at 1956 Cotner Ave in West LA, for the first of 3 days of rehearsals, running through about 20 different songs numerous times, including a few songs that would make it to the Blue Album 2 years later.”

Koch continued, “The room at TK was hot and sweaty — gross, frankly — and the band worked very hard, ironing out a million snags and mistakes, repeatedly jamming the songs until they sounded like rock music. On day 3, Rivers rolled tape on his 8 Track cassette recorder, and they recorded everything till they had something they could listen back to.”

He added, “For all of this, weezer wasn’t really even ‘weezer’ yet, because the band wouldn’t get its name until a few hours before their first show on 3/19/92, closing the night out at Raji’s after the debut performance of Keanu Reeves’ Dogstar. But regardless of when the name stuck, the band that has been going strong for 30 years now was born.”