Weatherman finds out that his TV is touchscreen. 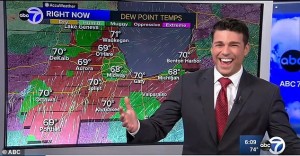 It was during a live broadcast that this Chicago Weathermanrealized that his screen had been a touch screenall along. As he was showing the areas near the city that would get precipitation, his hand skimmed the TVand moved the screen. At that moment it seemed like he had become a kid with a new toy. He was so ecstatic about the touchscreen, as well as his coworkers. One coworker even came up and tried it himself. His mind just loved the idea as he played around with it on television and learned that you can zoom in and outalong with moving the screenand also that you are able to tilt the flat image to make it more 3-D-like. Watch this video and enjoy a man become a kid again with something so simple!