Tom Cruise Takes James Corden Out On a Fighter Jet 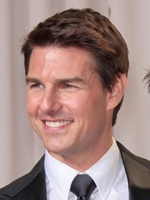 In anticipation of Top Gun: Maverick hitting theaters on Friday (May 27th), Tom Cruise and James Corden flew high in the sky on Monday night’s episode of The Late Late Show. Cruise took Corden out on a couple of different planes in the desert, including a vintage fighter jet.

“With all due respect, you played a lawyer in ‘A Few Good Men.’ I wouldn’t want you to represent me in court,” Corden told the Jerry Maguire actor, as he expressed uncertainty about getting in the fighter jet with him.

Meanwhile, Cruise told the camera, “I’m very excited that James is doing this. Was he the first late-night show that I asked? Hell, no. He was just the first one — and the only one — who said yes.”

What followed was entertaining, as Cruise had fun rattling a nervous Corden with his piloting skills. The pair also ended up singing “Danger Zone.