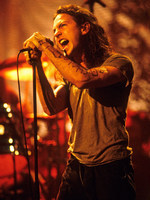 Pearl Jam’s Eddie Vedder took another jab at Motley Crue during a concert on Sunday (February 6th). According to Ultimate Classic Rock, during a a solo performance in Newark, NJ, ahead of a drum solo from current Vedder band drummer and Red Hot Chili Peppers member Chad Smith, Vedder told the audience, “That drum kit — that silver, beautiful machine that he is the engine of — does not need to elevate or rotate to do its job. Let me just point that out.”

The back and forth between Vedder and Nikki Sixx began after Vedder revealed in an interview that he “despised” most hair metal bands of the 1980s, specifically naming Motley Crue. Sixx responded, calling Pearl Jam “one of the most boring bands in history” and making fun of Vedder’s singing style. Pearl Jam fired back on social media, saying, “We [love] our bored fans,” including a video of excited concertgoers at a Pearl Jam show.