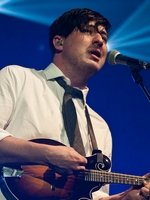 Steven Spielberg has directed some of the biggest box office movies of all time… like Jaws, Indiana Jones, and E.T., just to name a few. Steven decided to take a shot at directing music videos when he teamed up with Marcus Mumford for the song “Cannibal”. The duo shot the video this past week in a New York City high school gym. It took one shot and was recorded on Spielberg’s phone. “Cannibal” is the first song off of Marcus’ self-titled album set for release on September 16th.

On Sunday 3rd July in a high school gym in New York, Steven Spielberg directed his first music video, in one shot, on his phone. Kate Capshaw was the almighty dolly grip. pic.twitter.com/9KUvONG4u3

Steven Spielberg has officially made his first music video, shooting @marcusmumford‘s “Cannibal” on his phone. https://t.co/sNdR1PPKbm

Twenty One Pilots drops a "Stranger Things" version of "Heathens"