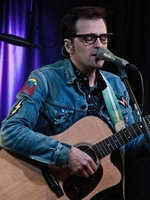 Rivers Cuomo tweeted Monday (Feb. 7th) that Weezer’s next four albums will be released on the first day of each season.

The singer wrote that the band’s SZNS records will debut with Spring on March 20th, and continue with Summer on June 20th, Fall on September 22nd and Winter on December 21st.

He added that the dates are “not confirmed with any record company or manager.”

Here are the SZNS release dates*:

*Those should be the first days of the seasons so please correct me if wrong.
*Also, not confirmed with any record company or manager.