PORTUGAL THE MAN TO DROP NEW SINGLE NEXT WEDNESDAY. 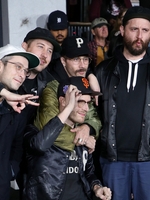 The band announced Monday (Jan. 31st) that in conjunction with the single, they are launching a campaign to reward fans who pre-save the track with PTM Coin, the band’s very own community-built social token (a type of cryptocurrency).

Produced by Jeff Bhasker, “What, Me Worry?” is the first single from the band’s long-awaited 9th studio album, due out this June.

The new track arrives as the rockers prepare for their upcoming 34-date tour alongside alt-J, set to kick off Feb 25th with support from Sir Chloe and Cherry Glazerr.