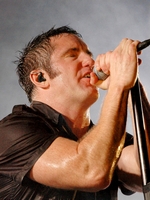 Nine Inch Nails have announced a series of U.S. shows, their first in four years, beginning on April 28th at Red Hat Amphitheater in Raleigh, NC. The tour will wrap up on September 24th with a special show in Cleveland, where Trent Reznor founded the band in 1988. For that show, they will be joined by special guests Ministry and Nitzer Ebb. Special guests for the other dates will be announced shortly.

Tickets for the tour will go on sale to the public beginning on Friday (February 11th) at 10 a.m. local time.

Nine Inch Nails last toured in 2018 on the Cold And Black And Infinite Tour.

Beck And Phoenix To Tour Together This Summer