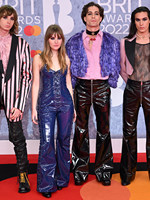 Maneskin attended the BRIT Awards on Wednesday (February 8th) night where they were nominated for Best International Group and International Song of The Year, but unfortunately went home empty-handed. The band was just happy to be a part of the night, telling NME on the red carpet before the show that they were most looking forward to hanging out with Ed Sheeran saying, “he’s a good party animal! We had a good party with him.”

Maneskin also touched on their upcoming album, the followup to 2021’s Teatro d’ira: Vol. I. Damiano David said, “We just want to let the music lead us. We just want to write new music and see how it goes.”