Foo Fighters to play a VR concert in the Metaverse on Super Bowl Sunday. 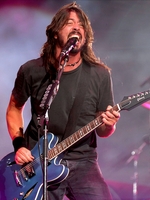 Foo Fighters are set to play a virtual reality concert in the metaverse on Super Bowl Sunday. According to Rolling Stone, the concert will start at 11:00 pm EST or at the conclusion of the Super Bowl. The show will feature the band performing one of their songs for the first time.

Dave Grohl released a statement, saying that the band will be collaborating with music video directot Mark Romanek, saying, “Foo Fighters love a challenge — from playing the biggest stages in the world to the tiniest clubs to making movies and miniseries… We’ve pretty much done it all.”

She continued, “But we’ve never collaborated with Mark Romanek on a conceptual set of songs (including one being played live for the first time ever) for a worldwide audience. Join us when we cross that one off the FF bucket list!”