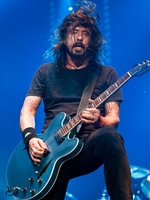 Foo Fighters have just added 10 news stops to its North American itinerary. The dates include nine Canadian shows and one U.S. date, which will serve as the tour’s finale on October 7th at Bend, Oregon’s Hayden Homes Amphitheater. The Foos have a couple of pre-tour concerts booked before launching the trek in May, and will next play on February 26th in Tempe, Arizona at Innings Festival.

The newly-inducted Rock and Roll Hall of Famers have snagged three nominations at the 2021 Grammys, with Medicine At Midnight making the shortlist for Best Rock Album, “Waiting On A War” for Best Rock Song, and “Making A Fire” for Best Rock Performance. The 64th Annual Grammy Awards air on April 3rd at 8 p.m. ET on CBS.

The Foo Fighters’ first movie, Studio 666, opens on February 25th, The horror-comedy stars the band and features appearances by Lionel Richie, Whitney Cummings, Jeff Garlin, and Will Forte. Studio 666 was directed BJ McDonnell and based on an original story by Dave Grohl.