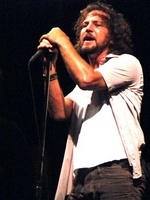 While chatting with The New York Times, the Pearl Jam frontman recalled discussing his and the band’s career with U2’s Bono, who had very specific opinions and advice for Vedder, recalling, “I’ve had conversations with Bono back in the day. He was suggesting that we needed to work harder and that you didn’t want rock n’ roll to become a niche. He said that when U2 makes a record, it’s like they’ve got a racehorse and they don’t just want the horse in the race, they want to win the race. I said we race the horse and then we let the horse run free. I wasn’t trying to be clever. That was the truth. He was frustrated with me. But the dream was to be in a group that toured and recorded, and we were okay with things being scaled down if that allowed the dream to survive.”

He explained that he’s aware of the affect Pearl Jam has had on its fans: “People tell me powerful stories about what the music means to them, so, in that way, I know what they get out of it. When people tell me that stuff, I don’t feel like I should get credit. They’ll say that a song helped them, but, ultimately, I’m like: ‘You did it.’ Really all I can do is hope that other people appreciate the music that I like.”

Regarding his connection to fellow Seattle legend Kurt Cobain, Vedder admitted, “I didn’t know Kurt that well. We had a few hangs. I’m grateful for those or those phone messages or being in the same room every once in a while, but it would be offensive to claim that I knew him more than I did.”

Vedder went on to say that seeing how Cobain and Nirvana looked at celebrity with a mixture of distain, confusion, and disinterest helped the guys in Pearl Jam come to terms with their own success: “That was naturally how we felt. I know it’s how I felt. But I think that his attitude made it okay to feel that way because he was the guy in the biggest spotlight. If he would’ve totally embraced all that stuff, it might have made me think, like, you better embrace this (expletive), too. You couldn’t argue that he wasn’t the figurehead of that whole thing. That’s probably one of the things that bummed him out the most.”

Like Bono, there are numerous causes that Eddie Vedder supports. But ultimately, he believes it’s more effective to get people involved and registered to vote than it is to preach from the stage.