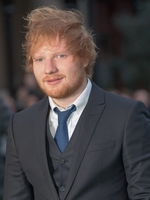 Ed Sheeran will be dropping his collaboration with Bring Me the Horizon on Friday (Feb. 18th).

Sheeran and the British rock band opened up the Brit Awards last week (Feb. 8th) with a rock version of the singer’s 2021 track “Bad Habits.” Bring Me the Horizon shared the pre-save link for the studio version of the song on their social media accounts Monday (Feb. 14th).

The post included a videotaped conversation with Sheeran in which he says, “It’s just a joy to be able to play electric guitar and actually rock out properly.”