Just released is the Orbit: Dave Grohl comic book by TidalWave Comics. The 22-page comic was written by Adam Rose and illustrated by Martin Gimenez, and is part of TidalWave’s “Orbit” series, which “focuses on personalities who impact the world.”

American Songwriter reported the comic, which spans Grohl’s entire life, “Takes readers inside Grohl’s childhood growing up in Virginia. One series details how playing drums was a form of healing in the wake of his parents’ divorce, along with the early days of his first band, punk rockers Scream. There’s also a page devoted to Kurt Cobain, frontman of Nirvana, who died in 1994.”

At one point, the animated Grohl character is quoted in the in the comic as saying, “Kurt’s death messed with me. Had me asking: who am I, where am I, what am I doing? He wasn’t with us anymore and that I had another day. I had to start from scratch with everything.”

Dave Grohl told us a while back that he and Kurt Cobain could always bond over hard rock:

Orbit: Dave Grohl is available on multiple online platforms has been published in both paperback and hard cover. 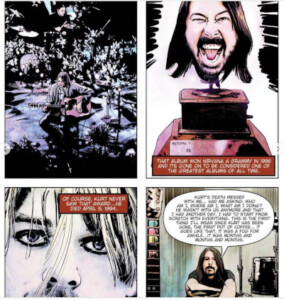