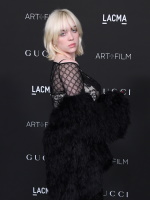 According to NME, Eilish introduced the track “TV” by saying, “We haven’t played a new song live before it’s out since 2017 or 2018. This one we just wrote, and we just wanted to play for you.”

A clip shared on Twitter shows the singer performing the track accompanied by her brother, Finneas, on acoustic guitar.