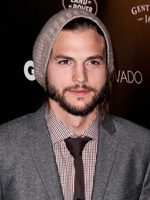 At the red-carpet premiere of Vengeance Monday night , Ashton Kutcher shared why he reprised his role as Michael Kelso for the That ‘70s Show spin-off, That ‘90s Show.

Kutcher said he and his wife, Mila Kunis, felt they owed it to the franchise. “Mila and I were contemplating it. We thought, ‘Listen, we’re only in the position that we’re in because of that show, so let’s just go back and do this.’ We just went back and had fun for a week. It was so random and fun.”

“It was really nostalgic to be back on the set,” Kutcher added. “It’s all the same folks that made ‘That ’70s Show,’ so it was pretty bizarre.”