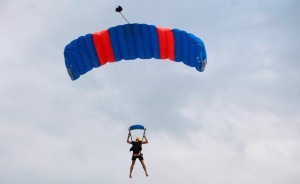 A Swedish woman has become the oldest skydiver at the age of 103.

Ruth Larson first took the dive at age 101. She returned to break the Guinness World Record on May 29th.

The previous record holder, Kathryn Hodges, was also 103, but Larson is older than Hodges was by mere days. (UPI)